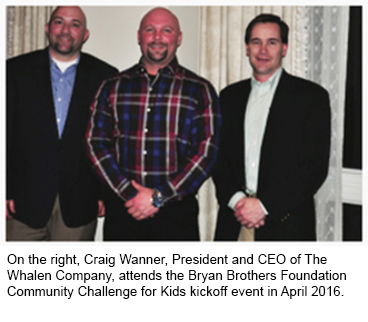 March 1, 2017 – In an effort to give a brighter future to local children, The Whalen Company is participating in the Bryan Brothers Foundation 2017 Community Challenge for Kids.

The challenge is a fundraising effort among local businesses on Maryland's Eastern Shore to raise as much money as possible to create more grant and funding opportunities through the Bryan Foundation. Local companies also benefit as their employees participate in team-building activities like fundraisers for the Bryan Foundation

The corporate sponsor that generates the most money will be announced at the foundation's annual spring event held in April.

Click here if you would like to help Whalen in the Community Challenge for Kids benefitting the Bryan Brothers Foundation.

About the Bryan Brothers Foundation

James (Jimmy) M. Bryan, Jr. was a well-known and respected member of the community. During his lifetime, Jimmy was an enthusiastic and generous supporter of local youth programs. He recognized the importance of such programs in developing values among young people. Jimmy Bryan passed away unexpectedly in 2003. With the support of many friends and colleagues, the James M. Bryan, Jr. “Building Dreams for Youth” Foundation was established in memory of Jimmy. Tragically, Jimmy’s brother Kenny passed away in 2004, just one year later. Brothers Bill and Allen, Sr., passed away in 2010 and 2011 respectively. In 2013, the Foundation’s Advisory Board made the decision to rename the Foundation “Bryan Brothers Building Dreams for Youth Foundation” to commemorate all four of the Bryan Brothers.

The Foundation’s mission is to help ensure that all children on the Eastern Shore have the opportunity to experience personal growth through participation in youth sports, recreation and development programs. The Foundation is multi-faceted in its approach. In some cases, working through established service organizations, grants are provided to children and families that find themselves in emergency situations. In other cases, the Foundation acts in a more pro-active fashion, identifying exceptional youth programs and assisting in their growth and increased outreach. And in still others, it responds to requests for program support and capital needs. The “Building Dreams for Youth” Foundation provides donors with the opportunity to support a broad range of worthwhile youth programs with their contribution. In doing so, donors will help guarantee a brighter future for Eastern Shore children, while honoring the memory of a kind and generous man and his brothers. Learn more about the Bryan Brothers Foundation.

Whalen fan coil and heat pump products are distinctive in concept, performance, reliability and energy efficiency, thereby delivering a “perfect fit” solution for customers.  In addition to their popularity in new construction projects, they are highly suited for renovation or equipment replacement projects completed in less time and at lower cost.